We call it character assassination for a reason. It’s the ultimate attack. The attack to the uniqueness of an individual, to the moral scaffolding of the person, to the sum of his qualities, a sum which unique blend of components makes that character so distinctive. Stripped from anything else, character remains. The Greek and Latin etymology of the word links character as a set of qualities, which mark or design (like the characters of a text), ‘an imprint on the soul’.

When politicians run out of policy arguments against opponents, they may resort to character. In fact, this is always a flag, a sign of desperation and a weakness, not a strength, on the part of the assassin.

Character is often translated into a set of words including, trust, courage, honesty respect, moral integrity etc. A solid set of values seem to be at the core of the DNA of character.

We need to bring character back to the table of Leadership. Why back? I seem to imply it has gone. Not quite, but it’s gone for long sabbaticals. The organizational airtime for character has been taken over by other more prosaic and often neon-like visible flashes of ‘what the leader does’, and even more, by ‘the 10 things successful leaders do’ and the ‘so many habits’. This is not bad in itself. Mirrors and examples and models are welcome, provided they are taken with a pinch of salt. However, these are shortcuts that avoid a deeper discussion.

But, it’s easier to talk about how good leaders empower, delegate, communicate well and set expectations, than to get down to the cave and look for the soul. In the choice between soul and the ’10 traits of successful leaders’, the latter sells much more. Also, we are told, C level business people don’t do soul.

I believe that the ultimate discussion about leadership is about character. Not even about personality. After all, personality has to do with the persona, the exterior, the mask, still not deep enough. Abraham Lincoln said that ‘Character is like a tree and reputation like its shadow. The shadow is what we think of it; the tree is the real thing’. Instead of reputation we could also say the visible persona, the external behavioural ‘presentations in everyday life’, as Erving Goffman [1] would have said.

The main challenge I see is that, as I said before, character has been evicted from the organizational/business/people conversation and now we tend to find it dwelling in the Self Help, New Age or Spiritual shelves. Even Western educational systems seem to be shy of the word these days.

I could picture an entire Leadership Development Programme devoted to Character, including its corrosion, to use Richard Sennett’ 1998 title of his book.

Those of us who occupy this territory (you, me, managers, practitioners, consultants) should be bold enough to unapologetically rescue character from its travels to other lands, so that it again occupies the centre of the dialogue, a centre that it shouldn’t have left.

Taken from my forthcoming book, Camino – Leadership Notes On The Road.

Camino – Leadership Notes on the Road

A collection of notes on leadership, initially written as Daily Thoughts. Camino, the Spanish for road, or way, reflects on leadership as a praxis that continuously evolves. Nobody is ever a leader. Becoming one is the real quest. But we never reach the destination. Our character is constantly shaped by places and journeys, encounters and experiences. The only real theory of leadership is travelling. The only footprints, our actions. The only test, what we leave behind.

Available for pre-order this month!

To be notified as soon as pre-orders go live – email us at:

Good leaders are good path makers. For me, a leader is the cartographer in chief who, whilst walking with others, also becomes an architect and a builder. If this is about journeys, and maps, and building, then there is almost no end to it.

On my imaginary journey inside my head, I took notes and articulated ideas. Most became my Daily Thoughts, a blog I have been running for years. This book is a collection of those notes. Don’t look for Harvard here, there are only harbours and other places that have generously adopted the content between them.

In this Camino (road in Spanish) of mine, I have also learnt to spot the real things, the fundamentals, the rocks. This is a collection of warnings, strong views and discoveries that I do not intend to be transferable. After all, the journey is not transferable, nobody can walk the Camino for you. Liberated by the idea that I don’t need to impart universal wisdom to end in a sterile case study and that I can share these notes and ideas, like one shares a meal without having to explain the chemistry of the ingredients, they are here in this book, still full of dust from my journey.  The one I have only just begun. 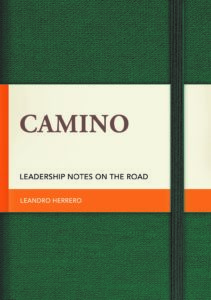 Dr Leandro Herrero is the CEO and Chief Organization Architect of The Chalfont Project [3], an international firm of organizational architects. He is the pioneer of Viral ChangeTM, a people Mobilizing Platform, a methodology that delivers large scale behavioural and cultural change in organizations, which creates lasting capacity for changeability.

Dr Herrero is also an Executive Fellow at the Centre for the Future of Organization, Drucker School of Management. An international speaker, Dr Herrero is available for virtual speaking engagements [4] and can be reached at: The Chalfont Project [5] or email: uk-office@thechalfontproject.com [2]