How do people change their mind? How can we influence people to change their minds? Well, any of us will bring ideas such as persuasion, manipulation, rational convincing, emotional appeal, and just about any other mechanism described in the influencing theory. In the absence of a magic bullet, it is legitimate to try anything. Then, there you are, yourself and your ethics. For some people there are no boundaries; others, at the other end, may also be too shy to push, even for a good cause. Behavioural economics will ‘nudge’ you by changing your behaviour.  And so on.

According to Ziad W. Munson, the author, their experiences in the community and working with other activists day-to-day, transformed their views. Interestingly, it wasn’t just a transformation ‘of the point of view’ but included a strong sense of duty and activism. In other words, they became ‘more Catholic than the Pope’, which is a poor translation of the expression we use in Spanish, ‘mas papista que el Papa’.

Some behavioural economists such as the prolific Cass Sunstein [1] have argued that people who are polarised, when discussing in a group situation end up being even more polarised. Those experimental social studies do not sync too well with the reality, a fact very common in social science unfortunately. The reality is that people can change their minds even if they were polarised on one side of the argument. The pro-life study that I mentioned above is a good reminder of our human flexibility (or the power of homo imitans [2]as I have described in my book).

Maybe the old common wisdom is still a good one: see it for yourself, experience it yourself, don’t listen to me, see what I do, not what I say, go to the field, get up from your desk and experience the realities of the streets, the fields, the workplaces, the neighbourhoods, the shops, the markets, the offices, etc, everywhere where ‘the real-real’ lives every day.

There are people who will change their mind by reading a book on the topic, or by listening to a charismatic person. But if you want culture change of some sort, which is change at scale, you won’t have people (at scale) changing their minds by reading lots of books.

To change people’s minds, provide ‘experience’ and ‘place’, not just a convincing argument and logic. If you want some continuity, and scale, that is.

‘Change is social, doing it together, a praxis.’

‘More Confucius and Tao than Aristotle. More Roman than Greek. Individual change happens by ‘doing it in a group’ and experiencing it. It’s not conceptual. It’s not simply contractual either: lose 5 kilos in 3 months. It’s ‘collapsing the distinction between knowing and doing’.’

Change is social, doing it together, a praxis. The modern Kyoto Zen school is truly rich in observations. The Roman vs Greek comparison is very present in recent Taleb [4] writings. The ‘collapsing the distinction between knowing and doing’ is of course on the Zen side.

Extract from my book: The Flipping point – Deprogramming Management. [5]

A flipping point in the trend for adopting absurd management ideas needs to be reached. Management needs deprogramming. This book of 200, tweet-sized, vignettes, looks at the other side of things – flipping the coin. It asks us to use more rigour and critical thinking in how we use assumptions and management practices that were created many years ago.

Our real and present danger is not a future of robots and AI, but of current established BS. In this book, you are invited to the Mother of All Call Outs! 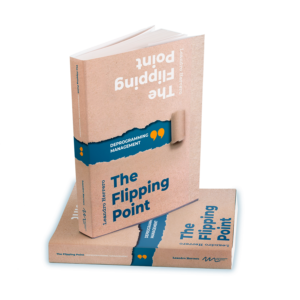