Join my live webinar THIS WEEK. Book your seat! [1] I’ll be discussing leadership as a praxis…’no one is ever a leader, becoming one is the quest’ to mark the launch of my new leadership book: Camino – Leadership Notes on the Road. Joining me is Anett Helling [2], consultant in organization and leadership culture development and Jayne Lewis [3], leadership coach and organisational development practitioner.  Webinar includes a Q&A. Plus 10 copies of Camino to giveaway.

One of the key rules of activism (social, political, cause) is not to spend more than the minimum necessary time reacting to the opposition. Reacting to the push back, opposition, barriers, enemies, people who have a problem with X,Y,Z must be contained, or it will take over the whole airtime. A cause is not a permanent discussion with those who don’t like it.

Good activism is focused on driving the agenda (political, social) not on reacting to those who have a different one, or don’t like yours.

Against a backlash on X, the key is to build enough critical mass (people) for X, so that the ‘backlash people’ remain a minority; not to discuss with every possible ‘backlash people’ their reasons and rationale. Indeed, key activist-leaders may spend time discussing and trying to convince (and we see this all the time on our TV screens and press), but this is the visible part of the moving iceberg. True activism needs to push forward all the time.

In behavioural terms, I have written several times, [4] you don’t combat a behavioural epidemic from within; you create a counter-epidemic that takes over.

This key principle (drive the agenda, vs. react to an opposition) may sound harsh for us always wanting to convince via rationality and emotions. The point is, we should continue to do that but always be mindful of how much we are advancing. In pure activism terms (no moral judgement attached), the focus is to enlist as many pro-cause. Between the choice of spending time to get 50 more people engaged, or not doing so because we need to convince a few who ‘don’t get it’, the activist’s choice is clear: the 50+ win.

Park this principle for a second. Let’s reflect on how much of this is going on in our day-to-day management in organizations. I suspect not a lot. In the traditional ‘change management’ approach, a lot of energy went into full discussion and full intellectual engagement with ‘everybody’. Traditional ‘change management’ never distinguished between people’s attitudes; it never segmented the population properly so that it could focus on a majority that could create a fast critical mass. It also invented the flawed ‘people are resistant to change’, which made the whole affair duly masochistic.

What if leadership (and leadership of change for that matter) was closer to ‘activism ‘than ‘management’? What would the above rule mean?

Book your seat [1] for my live webinar THIS WEEK, I’ll be discussing leadership as a praxis…’no one is ever a leader, becoming one is the quest’ to mark the launch of my new leadership book: Camino – Leadership Notes on the Road. Joining me is Anett Helling [2], consultant in organization and leadership culture development and Jayne Lewis [3], leadership coach and organisational development practitioner.

Webinar includes a Q&A. Plus 10 copies of Camino to giveaway. 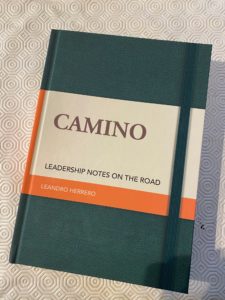 Dr Leandro Herrero is the CEO and Chief Organization Architect of The Chalfont Project [5], an international firm of organizational architects. He is the pioneer of Viral ChangeTM, a people Mobilizing Platform, a methodology that delivers large scale behavioural and cultural change in organizations, which creates lasting capacity for changeability.

Dr Herrero is also an Executive Fellow at the Centre for the Future of Organization, Drucker School of Management. An international speaker, Dr Herrero is available for virtual speaking engagements [6] and can be reached at: The Chalfont Project [7] or email: uk-office@thechalfontproject.com. [8]