There are two ways to carry a baby – in ancient Hinduism tradition – the way of the cat and the way of the monkey. The baby monkey, weak as he may be, climbs onto the mother and holds on. The baby cat is carried in the teeth of the mother; no effort required. Which one is better, an old tale says, asking the question?

Is there a cat and a monkey school of leadership? The monkey school requires the effort of the follower. The cat school is content with holding followers by the teeth . Which one is better?

(Please don’t say both, or it depends. Thanks)

Interestingly the Hindu tale continues by saying that the cat is better. ‘Yes’, Prabhupada said, ‘that is the difference between the yogi and the devotee. The yogi is trying to climb on the back of the Absolute Truth by his own strength, but he is very weak, so he will fall. But a devotee cries out for Krishna (God), and Krishna picks him up.’ (Steven J Rosen. The Agni and the Ectasy, 2012).

Question is how much do leaders think of the follower’s efforts. Sorry guys, you think that following is like this, but it’s hard work! You need to climb and hold on, and who knows whether you’ll fall, or we all will fall as a result. You are a bit heavy, you know?

(With apologies for stealing the spirituality piece)

Thank you to all the attendees who joined my webinar yesterday. It was great to see so many from across the globe –  it was a great event, lots of interaction and good energy all round.  Look out for more events being announced soon….

Camino – Notes on the Road is available at all major online bookstores. [1] 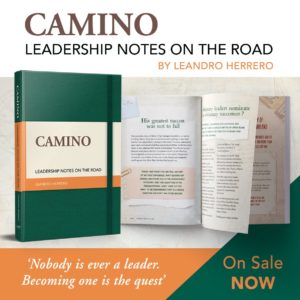