For those of you not yet familiar with the change. Daily Thoughts has evolved. New name and format. Rather than daily, I will share with you a weekly focus on culture change, leadership and organizational design fit for the future.

This week, I continue my focus on behaviours, looking at the importance of habits in creating meaning when it comes to large scale behavioural change.

Habits have no meaning, they create it. Start with behaviours, get meaning

In my organizational consulting work, and in behavioural terms, I am very used to being told, and challenged, that there is no point focusing on behaviours (as we do with my team) if people ‘don’t mean it’. The conventional wisdom is that meaning is first (intellectually, from your heart) and then behaviours are the output, the consequence; that behaviours by people who ‘don’t really mean it’ are simply useless.

There is a logic behind this. It is the Homo Sapiens logic. The well regarded view-of-our-selves that makes us feel superior, in full control of our actions.

This is, however, in contradiction with reality, where, every day, we all have plenty of things we do as habits, which would be very difficult to associate to a ‘previous meaning’.

We do things, we establish routines, and we don’t ask ourselves whether we mean them or not.

We just do them.

This is important because behaviours are copied (Homo Imitans) and therefore good routines and habits, if collective, are likely to be copied and multiplied. I have just described culture in the above line.

With my behavioural hat on, I prefer, a thousand times more people establishing some habits, adopting some behaviours, whether they mean it or not (and see afterwards the consequences of the circumstances that they themselves have created) than being stuck looking for the cognitive full understanding first. Translation: for example, in large scale organizational change, start adopting some key behaviours, creating some critical mass and then ‘find the meaning’. I know that this is unconventional and a bit counter intuitive in traditional organizational development. I also know that Homo Sapiens readers interpret this as a rejection or dismissal of cognition, reflection and critical thinking. Far from it. But in organizational terms, we cannot simply wait for the sequence ‘understanding-internalization-emotional integration-aha!-action’, for everybody on the payroll.

Routines and habits create meaning, at least as much, if not more, than the other way around.

In large scale behavioural change, define key behaviours and make them live and multiply them; and don’t worry about whether people ‘mean them or not’. Meaning will come.

I know Homo Sapiens do not like this, but I am writing here on behalf of Homo Imitans. [1] 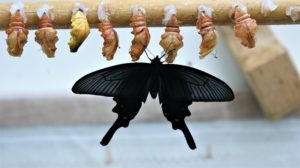 The Myths of Change [2]
Traditional management and a great deal of academic thinking is responsible for the colossal failure of ‘change programmes’.

This webinar, part of a series of 5 webinars, debunks uncontested assumptions in this area and uncovers the alternatives, whilst considering why this debunking of myths is even more relevant today in the current exceptional environment.

To drive change which makes organizations fit for the future, we must think and act differently in the management of our organizations, particularly in the areas of change and transformation. We must abandon change as something imposed in favour of people becoming true agents.

Organizations that have mastered this have been ‘fit for the future’ for a while!