‘Walk the talk’ is being consistent: say something and then do what you said you would. ‘Talk the walk’ is when you act first and then follow it up with words consistent with your actions. The former is good management, but the latter is an extremely powerful disruptive idea.

The expression ‘walk the talk’ means you do what you ask other people to do or what you promised to do. There are a few variations on the theme, but they all come down to this: practice what you preach! Walking the talk is a key behaviour in the organisation (but not a disruptive behaviour). Walking the talk is absolutely necessary and people who do this are true value creators in three ways:

They build trust. Trust professes the most ‘unfair’ un-linearity of all: small breaches of trust have the power of extrapolation, generalisation and of triggering total defence: “If you have failed me on this one, you’ll do it again.” People who walk the talk are reinforcing trust all the time because their primary driver is to behave in a way that shows consistency with what they say. Some of these people do this in a rather unconscious way.

They are powerful role models. The power of imitation and/or social copying is enormous. Although one could role model via language, expressions, declaration of values, etc., there is nothing more powerful than overt, observable behaviours. Most of these powerful behaviours are silent. By that I mean that they are not announced and heralded; they happen naturally, not through spin.

They practice behavioural translation. Our language is full of things that we call values, beliefs, mindsets, attitudes, etc. We can have good conversations within that vocabulary, but these may happen under the false assumption that we all agree on the specific meaning of these terms. Only behaviours are observable and unequivocal. There is no such thing as honesty, at least like there is grey hair or a deep voice. There are behaviours that when exhibited we agree to call honest. From there we then infer and create ‘honesty’ as a value-concept. The problem with mindsets, attitudes, values, etc. is that they are not operational. We can’t do much with them unless we translate those values and beliefs into observable behaviours.

All this is very well and desirable, almost a baseline. Hardly negative. You need all those behaviours and all those people big time. But the disruptive behaviour is actually the reverse of walk the talk. ‘Talk the walk’ goes beyond the simply needing to find that inherent disproportion between the relatively simple behaviour and the big impact in the organization:

The ‘talk the walk ‘disruptive behaviour can also be described as: do more, talk less.

‘Talk the walk’ is highly viral because people will see you doing something and then they will hear about the philosophy or the rationale behind it. Seeing the behaviour is the first step to successful imitation. Start with the action, follow up with the words. It doesn’t get more disruptive than that!

Imagine a culture with good mutual levels of trust because people do what they say they will do. Imagine a ‘walk the talk’ management culture where there is a clear observation of consistency between what management (or others) say they will do and what they actually do. Imagine an organization working like that. Now imagine a culture where the action is more visible than the ‘talk’ and where people are going beyond the ‘walk the talk’ to talk about what has already been walked! Imagine the behaviours in the organization. What will you see and what will be the benefits? Imagine what this will do for your overall trust capital. Imagine where to start building it.

For more thoughts on company culture….

Watch our webinar on The Myths of Company Culture [1] 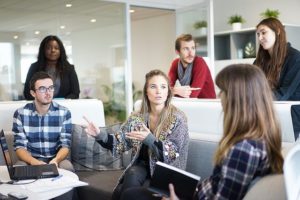 Stuck in old concepts, we have made culture change hard and often impossible. The failure of communication programmes or ‘culture training’ tell us a lot about the myths in this area. Learn how to successfully mobilize your people for a purpose and change culture. Culture is the key to the complex post Covid-19 future in front of us. Over the Covid-19 peak across the world we have seen the best and the worst of company cultures. Sometimes it felt like a pressure cooker. Culture is now ‘the strategy’, but we need to get rid of some assumptions and learn inconvenient truths.

‘Thank you for the opportunity to participate in this fantastic webinar. Both the depth of the discussion between Leandro and Carlos and the very intensive exchange in the chat inspired me.’

‘It was a great pleasure to participate in today’s webinar…. If you would have been sitting next to me, you would have seen a lot of ‘head nodding’ and heard a couple of loud ‘yes’es’ from the bottom of my heart.’